Objectives are the main way in which League of Legends gives players a reason to keep playing. Objectives reward players with experience points and champion shards, two items that can be used to improve item builds or summoner spells. This article explains how objectives work, and why they’re so important for player retention

League of Legends is a multiplayer online battle arena video game developed and published by Riot Games. The objective in the game is to destroy the enemy’s base using minions, turrets, and powerful units. 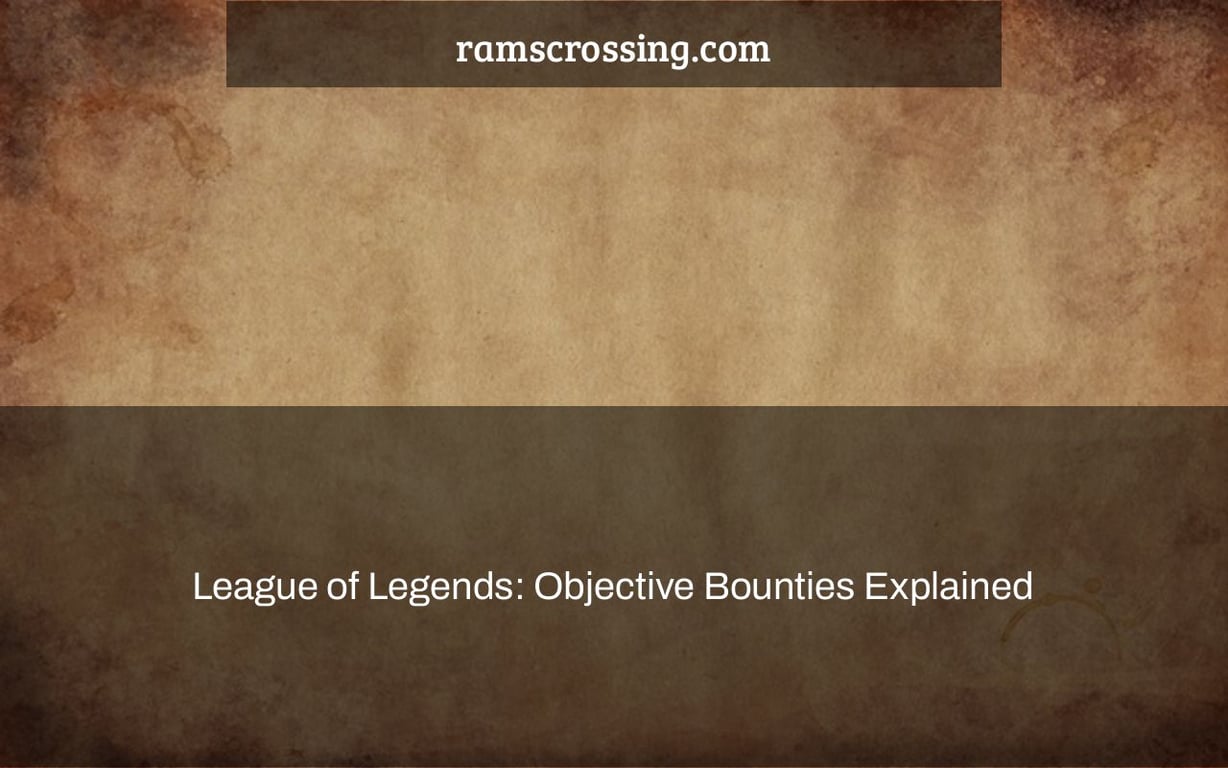 Added during the preseason for Season 12, objective bounties are a new element to League of Legends. The idea of these bounties is to provide a chance for teams who are behind on money and objectives to catch up to the other side. We’ll go over what objective bounties are in general, how much gold they’re worth, and several methods that include them in this post.

Season 12 New Dragons: What You Need to Know

What are Objective Bounties, and how do they work?

Champion bounties are analogous to objective bounties. The bounties become available for a team to try when they fall severely behind on their goals. Riot made it plain in the patch notes for 11.23 that they’re going to optimize this in a manner that doesn’t render the opposing team’s lead meaningless. So it seems that the goal is to give losing teams a chance to catch up a little bit, but not fully.

According to the patch notes for 11.23, objective bounties are based on four main factors. There are four types of leads: XP, Gold, Dragon, and Turret. When the gold is claimed, it will be divided among the team members. The gold values per goal bounty at the start are as follows:

How to Make Objective Bounties Work for You

The key to getting the most out of Objective Bounties is deciding which ones to pursue. It’s important to remember that you don’t have to collect every single reward. While doing so would be wonderful, and you should do so if you can, it isn’t the final aim. If your squad aggressively pursues every reward, you’ll almost certainly fall farther behind. Choose the proper ones and keep playing wisely. The worst thing you can do is fall farther behind and, as a result, miss out on any of the rewards. It’s not worth 500 gold for your team to earn an ace.

Playing regularly is the best approach to find out which bounties to go for. Consider them to be analogous to the early-game increases to tower gold. It’s good to have a little more gold, but it’s not worth dying for. If your team manages to make a comeback, objective bounties are primarily meant to assist them in regaining control of the game. Consider your options carefully and always play with a risk management mindset.

What are the Best Objective Bounties?

If you get the chance, each form of goal bounty is worthwhile, although some are better than others. In general, I believe that concentrating tower bounties is the most effective. Taking a tower for a comeback is simpler than taking a Baron or a Dragon. The towers were the most common objective bounties in the majority of the games I’ve played where my team obtained objective bounties. However, if you’re the jungler, you should surely concentrate on the bigger goals.

Are League of Legends’ Objective Bounties a Good Addition?

This is a complicated subject, but in the end, I believe objective bounties are beneficial. They don’t give out enough gold to become an issue, but they do give out enough to be worthwhile. They’re an excellent addition to the game since they can’t turn a game around on their own.

However, if Riot begins to balance them more in the direction of becoming game changers, I may have to reconsider my position. It’s critical that a team’s advantage isn’t squandered on a single tower or dragon, so Riot must tread carefully here.

Be a part of the High Ground

That’s all there is to objective bounties! They’ve definitely helped to liven up League of Legends this preseason, and hopefully you now have a better grasp on how they function. Have fun as we kick off the new League season, and remember to hold the high ground!

How is objective bounty calculated?

A: The game has a built-in bounty system that helps you to keep track of your progress. Your objective is set by the difficulty level, so Ill give an example with Easy mode:
Your first kill will be worth 100 points and each subsequent kill will only get you 10 more points. With every 10 kills, your reward doubles going from 2,000 up to 20,000.

What are objectives in League of Legends?

A: Objectives are quests that reward you with experience, gold, or other in-game currency. You complete objectives by killing the monster/objectives designated enemies and collecting a bounty of their ichor.

How are Bounties calculated in league?