Fantasy football leagues often struggle with player v. team trades for the final weeks of the season, but Week 17 offers an opportunity to avoid this issue altogether by trading players before their playoff matchups are set in stone. This week’s QB/RB trade rumors offer a few interesting options that will make fantasy owners’ heads spin and could have major implications on what they need to do during next week’s waiver wire madness.

The “2020 quarterback rankings” is a fantasy football article that discusses the top quarterbacks in 2020. The article also provides a list of the top 10 running backs for 2020. 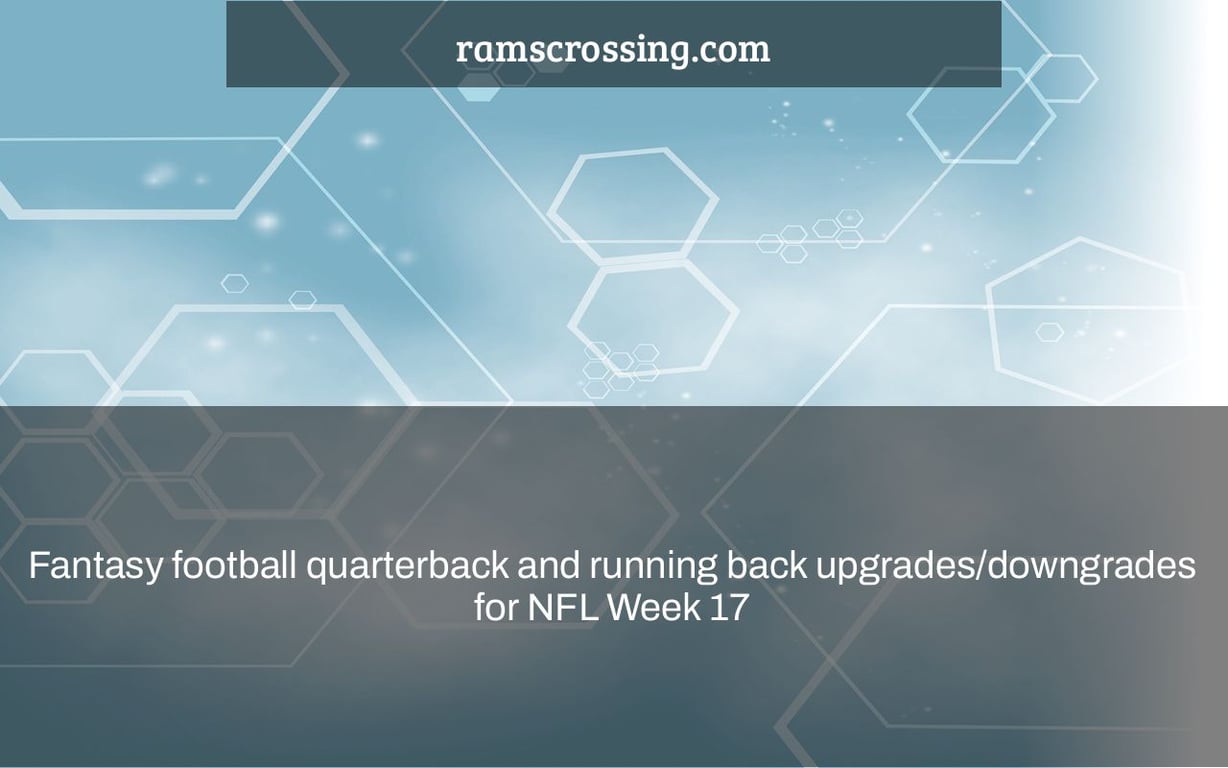 Although offensive and defensive linemen do not carry the ball, they may still have an impact on fantasy football.

We break down matchups in the trenches every week in this location, and how that knowledge influences your lineup selections. Our win rate measures — run block win rate and run stop win rate, as well as pass block win rate and pass rush win rate — are the foundation of the conversation, and they quantify line performance based on player tracking data from NFL Next Gen Stats.

We utilized the win rate difference earlier in the season to select the best matchup. However, in the second half of the season, we’ll focus on the players who will go up against the weakest — and best — defensive win rate teams. The reason for this is because at this point in the season, we’ve already formed an opinion of a running back based on the blocking he receives from his offensive line. The defense varies from week to week. Consider a receiver who gets passes from the same quarterback every week, but faces a new corner every week.

We’ve broken down the Week 17 games below, determining the best and worst matchups based on the quality of the opponent’s defensive win percentages, both run and pass.

Only Dillon was on the field the last time the Packers and Vikings met, so Aaron Jones is finally getting his chance against the league’s worst run defense. In that Week 11 defeat to Minnesota, Dillon averaged 4.8 yards per run, which is similar to the 4.7 yards per rush the Vikings have allowed on average this season.

The Vikings beat Green Bay in Week 11 and Dillon only had 11 touches, but if the Packers take the lead, there should be enough of running volume to go around.

Najee Harris’ performance against Kansas City exemplified what we’ve been saying for weeks in this space: the Chiefs’ defense is much better than it was, but you can still run on them. In a blowout defeat against the Chiefs, Harris, who has battled with efficiency all season, gained 93 yards on 19 runs (4.9 yards per carry).

Now it’s Mixon, who has a far superior run-blocking line than Harris, who reaps the rewards of the Chiefs’ run defense during a week when many fantasy leagues are crowning winners. It’s perfect time for those who have the Bengals’ back on their roster.

In the trenches, this is a matchup of equals, albeit Freeman and Murray are coming off an ineffective game against the Bengals, who are a far poorer run defense than the Rams (though they were also playing with Josh Johnson at QB, to be fair). Along the defensive line, L.A. has Aaron Donald, Greg Gaines, A’Shawn Robinson, and Von Miller, all of whom are above average or great. The Baltimore running backs should have a difficult time.

If you’re considering a last-minute switch to Duke Johnson for your fantasy championship, at the very least consider all of your options. Even if Johnson returns to the starting lineup, the Titans’ run defense is formidable. This season, linebacker Zach Cunningham leads all players in run stop win rate, while interior defender Jeffery Simmons ranks 12th.

Denver’s pass rush isn’t all that scary without Von Miller. Even with Bradley Chubb returning, who has a pass rush win percentage of just 10% at the edge. In fact, Malik Reed of the Denver Broncos is worst among all qualifiers in pass rush victory rate at the edge, with just a 6% win rate. Dre’Mont Jones, who ranks ninth in PRWR at defensive tackle with 12 percent, is the Broncos’ greatest danger.

All of this points to Herbert having a great bounce-back game after struggling against the Texans in Week 16.

If Huntley or Jackson return to play in Week 17, they’ll face a difficult opponent. With Donald (first among defensive tackles in pass rush win rate), Gaines (15th), Miller (20th at edge), and Floyd (25th) bearing down, expect both to be put under a lot of pressure. Of course, both have rushing abilities, which should help to ease the matchup, but it’s still not ideal.

Keep an eye on your sack

When he’s been on the field, Tryon-Shoyinka has been a force at the edge, with an 18 percent pass rush victory rate (a little above 16 percent average the position). With Jason Pierre-Paul out last week, Tryon-Shoyinka saw more action, and he’ll likely do so again this week with Shaq Barrett out with a knee injury. And he has an easy matchup in Zach Wilson, who has the league’s second-highest sack rate (9.2 percent of dropbacks).

After demolishing the Ravens, Joe Burrow has received a lot of accolades this week. Burrow does, however, have a serious flaw that may be exploited: sacking. It’s most likely a combo of his proclivity for taking them and a pass-blocking line in front of him. Whatever causes Burrow’s 8.6% sack rate, it’s a chance for rival defenders to take advantage of. Jones has a decent chance of capitalizing on the situation.